A good summary of the story so far, from the Daily Mail [UK]

Fix those helicorders! They are ALL turned OFF since Nov. 4 and most are broken!

How can authorities guarantee the safety of Louisiana water, Bayou Corne neighbors and the national gas supply if you have NO monitors at this dangerous caved-in salt cavern next to huge butane storage tanks?

This has a good explanation of brining.

“The area to the west of Grand Bayou along Highway 70 that was once part of the Mandatory and Voluntary Evacuation Order from the Bayou Corne Sinkhole is now removed from any Evacuation Orders, with the exception of the residential area near Bayou Corne.

The area has been reviewed and through the preponderance of evidence, the area has been deemed no longer at risk due to the Sinkhole and gas associated with its creation. Please note that the area of Sportsman’s Drive and a small portion of Crawfish Stew St. remains in the designated evacuations until these areas can be investigated to show that all risks have been eliminated from concerns due to the creation of the Bayou Corne Sinkhole and the failure of Oxy Geismar Cavern 3. . . “ (more)

We are real sure “through the preponderance of evidence” is a legal phrase.

Over in Florida – ‘Guacamole-thick’ algae causes crisis on Florida coastline

“STUART, Fla. — A smelly, “guacamole-thick” muck is fouling a stretch of beaches promoted as Florida’s “Treasure Coast,” where lawmakers and residents blame the federal government, saying the algae crisis is fueled by freshwater flows controlled by Army officials to protect an erosion-prone dike.”

” . . . From 2010 to October 2014, the Obama administration approved more than 1,500 permit applications for offshore drilling plans that included fracking at hundreds of wells across the Gulf of Mexico  . . .”

Starting on Wednesday there’s been lots going on under the murky waters of Lake FUBAR, the ever-expanding sinkhole at Bayou Corne.

Request for Information:
Anyone in South Louisiana with a Geiger counter please comment here if you see anything ticking up.
OR – send e-mail (contact info is on the ‘About Us’ page, top tabs).

The revised date on the survey is Mar. 3 and the profile is from Feb.

The flooding continues – see posts below for info links

Reader, Walter thinks a second sinkhole is forming. It sure looks like it!
(see comments) 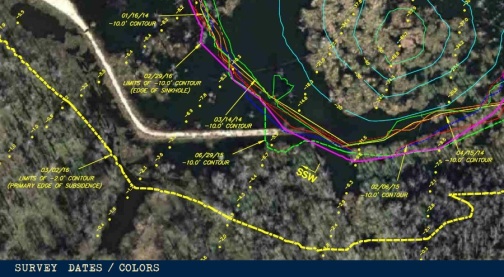