LINK –  http://youtu.be/v0SL83gTMKw    < has interesting Salt Dome graphics 3 min. in and at 6:52 min. mark it shows the fissure on the sea floor (!) – The Salt Dome graphics may be from this article: BK Lim – Why is BP’s Macondo blowout so disastrous & Beyond Patch-up.

” . . .  In Ohio, methane blowouts from fracking wells have forced people to flee their homes out of fear of explosions. Last month, about 30 families who live near the Ohio River in Monroe County had limited access to their homes for 10 days after a well began spewing methane. . . “

A reader writes: ” I haven’t seen photos of the sinkhole for a very long time…”

Neither has anyone else. Any drone hobbyists out there?

A federal judge will hold BP responsible for spilling 3.19 million barrels of oil into the Gulf of Mexico in the 2010 Deepwater Horizon disaster — a finding that could lead to a penalty of nearly $14 billion.

Quite a few bigger quakes in OK and CA going on. They are on the sidebar in the RSS feed from USGS.

This could be absolutely explosive information.  I have resided in this area since 1994 and have never witnessed such a very specific aircraft flyover in order to patrol the coast, and possibly even drop ordiance, even for training.  This video was filmed ‘near’ an Air Force Base but it’s not a very active base.  .  . (story has video)

In the news recently there are some items about Russia extending its war games field. It could be a reaction to US/NATO threatening Russia with actions in Poland. So it isn’t startling that Russian vessels are in the Gulf.

. . . . but maybe they are examining the Gulf for methane, oil leak impact or other thing related to Louisiana.

The NRC is pulling a fast one that will affect the Gulf coast states. Nuke plant danger looms and liability can get dumped on taxpayers if this flim-flam goes through. Mining Awareness has the story – Nuclear Reactor Licenses: US NRC can’t figure out to whom they are being transferred- Urgent Comment Deadline  This article has docs from Louisiana Power LLC. And he says it is urgent because the public comment on it is only open til Jan. 2.

You can spread the story around with this small url: http://tinyurl.com/k9ln24n

The price of shrinking the Gulf of Mexico dead zone

Seismic activity returned around 6:45 a.m.. Some helicorders show ‘fuzz’ and no big dings and others look like this:

Jumping Jack Flash has an announcement about a book. He is interesting.

Agency can look at rig owner’s role in oil spill

NEW ORLEANS — A federal appeals court in New Orleans has upheld a federal safety board’s right to investigate the role of Transocean Deepwater Drilling Corp. in the 2010 Gulf of Mexico oil disaster.
Transocean owned the Deepwater Horizon rig that was drilling for BP PLC at its Macondo well, about 50 miles off the Louisiana coast when an explosion killed 11 workers and led to the nation’s worst offshore oil spill.

WASHINGTON _ Environmental groups on Thursday pressured the Obama administration to clamp down on methane leaking from the oil and gas sector by imposing new regulations targeting wells, valves and other infrastructure….

And now for some cheery news ….

AFTERNOON: Same as Saturday.  AND IT’S NOT  WORK TRUCKS. STRUM, STRUM, STRUMMIN’ ON THE OL’ GUITAR.

We don’t know what’s going on with these relocated helicorders. They are acting up but they may have been installed wrong. Perfectly calm in some locations (map in next post ↓ ) and then this at LA 17-02.

Wild ride with the helicorders. LA11.  There was a 6.5 Mexico quake that set everything off at Bayou Corne.

There was another big one, 4.6 there that probably shook Bayou Corne too. It was at about 8 p.m. CST.

Real Coastal Warriors follows all the BP news so we don’t post everything on that front but . . . they have these items of interest –

“Something bad is happening in the ocean. No one’s certain what’s causing it, but in the past three months more than 550 bottlenose dolphins have stranded along the Atlantic Coast and there’s no indication that the strandings are letting up. While researches rush to catalog data on the dolphins’ deaths, larger questions loom — is the Atlantic coastal ecosystem broken, and are humans the cause?”

BP has allegedly been hiring internet “trolls,” disruptive site visitors who purposely attack and provoke users wanting to have honest and thoughtful interaction, to attack environmentalists, scientists, and critics of BP of America (BAP). An anonymous whistleblower with the Government Accountability Office in Washington D.C. has come forth with information that points to BP and Ogilvy, its PR firm, for paying people to harass Facebook users.

“The US Coast Guard has discovered a 4,100-pound tar mat under the sand around Louisiana’s southernmost port. It is believed to be left over from the 2010 BP Deepwater Horizon oil spill.” < it better not be from an asphalt volcano!

“. . . .Should Barbier find BP and its contractors simply “negligent” in the spill aftermath, the Clean Water Act allows for up to $1,100 for each barrel of oil leaked into the ocean. Should he determine “gross negligence” or “willful misconduct,” BP could face maximum fines of $4,300 per barrel of oil.”

Fire rages after another [oil] train derails in Canada

We missed this Julie Dermansky article from March – Down the Hole

NOTE: We added this paper to the Salt Dome page near the bottom with the aquifer items –
SALT DOMES AND WATER QUALITY IN THE GULF COAST AQUIFER, 2008 paper
ALSO – a lot of papers are available at Scribed.com. Look up “Underground Gas Storage” on their site.
Texas Brine lies when they claim “this never happened before, blah, blah . . .”  see:
Failure rates for underground gas storage

WBRZ- Flood official: oil companies ‘trashed the hotel room’
Loud booms over Tennessee
‘Crazy’ ants taking over Louisiana
There’s a big blog of storm down by the Yucatan peninsula weather sites are watching.
This map shows a lot of poor air quality on the Louisiana coast and central Florida.
The Parish blog has an activity update. No trucks on the berm roads due to “dampness”.

Helicorders show crazy seismic activity, sans work trucks today. The berm roads are soggy from all the rain this week so that may be the reason trucks aren’t out there screing up the helicorder results.
5 p.m. – 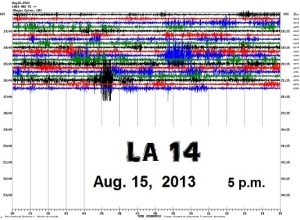 NOTE: We have added newer content to the posts marking the 1 year anniversary and to some of the recent explosions. Scroll down to see them.