Is this coming to the sinkhole too??? 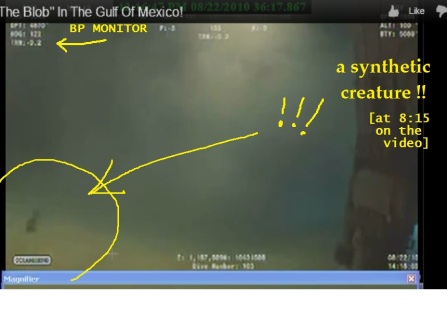 This is the live camera page http://globalwarming.markey.house.gov/spillcam/

If one faction of the deepwater drilling debate continues to deny any serious risk of more exploratory drilling – an example of this denial would be the court injunction, just now successfully obtained by oil industry attorneys, overturning the Federal exploratory drilling moratorium in the deepwater Gulf – it is fair and appropriate to state the ultimate potential danger of expanded drilling. And this is one serious worst case.

From the Asymmetric Threats Contingency Alliance, viaMi2g.com, a work-in-progress worst-case risk description concludes with this paragraph: “The danger of loss of buoyancy and cascading tsunamis in the Gulf of Mexico — caused by the release of the massive methane and poisonous gas bubble — has been a much lower probability in the early period of the crisis, which began on April 20th. However, as time goes by and the risk increases, this low probability high impact scenario ought not to be ignored, given that the safety and security of the personnel involved remains paramount. Could this be how nature eventually seals the hole created by the Gulf of Mexico oil gusher?”

“By some geologists’ estimates, the methane could be a massive bubble trapped for thousands of years under the Gulf of Mexico sea floor. More than a year ago, geologists expressed alarm in regard to BP and Transocean putting their exploratory rig directly over this massive underground reservoir of methane. Warnings were raised before the Deepwater Horizon catastrophe that the area of seabed chosen might be unstable and inherently dangerous.”

“. . . . The intractable problem is that this methane, located deep in the bowels of the earth, is under tremendous pressure. Experts agree that the pressure that blows the oil into the Gulf waters is estimated to be between 30,000 and 70,000 pounds per square inch (psi). Some speculate that the pressure of the methane at the base of the well head, deep under the ocean floor, may be as high as 100,000 psi — far too much for current technology to contain. The shutoff valves and safety measures were only built for thousands of psi at best. There is no known device to cap a well with such an ultra high pressure.”

Oil reported at BP’s Macondo Well in Gulf — Could be “fissures or cracks in sea floor” — NOAA covering up?

Scary article! And the first comment is MORE scary!

I KNEW THIS and most everyone on here. Does the cracked sea floor and possible Methane Dome that runs from the Gulf up the Mississippi causing the gas bubbles over in Bayou Corne and the dome to fall in
If the sea floor is cracked there is a huge possibility of underwater earthquakes and in the area where BP drilled the shale is broken and unstable its layered and unsafe. BP may have started the end of the World. Especially if the Methane cap is melting. Scientists need to scramble if the methane under 50,000 PSI starts to melt the escaping massive gas geyser would wipe out the Gulf Coastline .

Newspaper: Giant deposits of BP’s oil on or beneath Gulf floor