Natural earthquakes and nuclear explosions produce seismic waves that register on seismic monitoring networks around the globe, allowing the scientific community to pinpoint the location of the events. In order to distinguish seismic waves produced by a variety of activities — from traffic to mining to explosions — scientists study the seismic waves generated by as many types of events as possible. In August 2012, the emergence of a very large sinkhole at the Napoleonville Salt Dome in Louisiana offered University of California, Berkeley scientists the opportunity to detect, locate and analyze a rich sequence of 62 seismic events that occurred one day prior to its discovery. . .  (more)

Dutchsinse has more with graphics.

New reports on the Louisiana Bayou Corne sinkhole show that it has collapsed into the Aquifer, making this ever expanding sinkhole an issue not just for the residents of Bayou Corne, but for the entire region as polluted water now being flowing through what is normally clean aquifer water.

The video below not only shows the activity being seen, but splits the screen with the local meeting held where officials attempt to explain and answer questions from understandably concerned citizens. . . .

And this face book photo.

LA14 is on a bender!  Someone  lock the liquor cabinet!
Otherwise things are fairly calm at Lake FUBAR.

Texas Brine put out a  new ‘factsheet’ that explains (but not really) what’s going on with the helicorders and why they remain at Code 1 not matter what the seismic activity is.

Lake FUBAR trivia: The gas ‘fingerprint’ comparison studies are linked at the lower part of this page.

There was a big deadline for Texas Brine to come up with a new plan by April 30th in the tacked on amendment (#10) to the DNR emergency declaration. We just noticed it.

Maybe they got one up that we don’t know about.

This has to stop!  LA12 has the grumbles  well before dawn (not work trucks etc.)

We found a lot of science papers on underground storage from Sandia labs. We’ll add this link to the page about the Carlsbad WIPP disaster.

Dutchsinse has a post about all the US quakes this week with a map.

” . . . WIPP is located in one of the world’s largest karstlands as evidenced by Carlsbad Caverns, ‘bottomless lakes’, appearing and disappearing rivers such as the Rio Negro, near Loving, sinkholes and many other regional geologic features. Here, streams of water run underground instead of above ground, dissolving the soft rock and old salt deposits as they flow, making the WIPP site an unsuitable location for permanent disposal of radioactive wastes.”

More of the Idaho info and resources are on the part 1 page at the bottom.

May 6 – It’s up, up and away for ancient trapped helium at Yellowstone   – (seems to have originated in Feb. 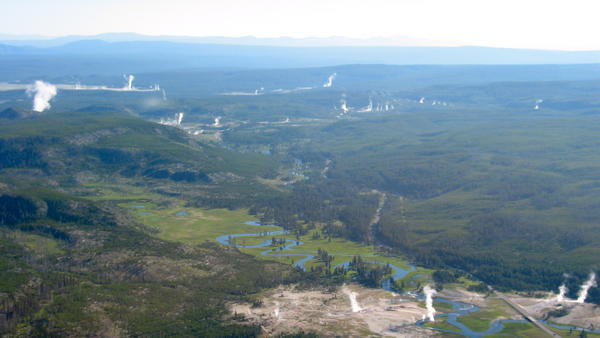 (April 8) What Helium Can Tell Us About Volcanoes

(old) Ancient Helium Is Escaping From Yellowstone by the Ton < Video

“. . .  the researchers found that the increased size of the volcano includes lots of stable material — that is, solid rock — and less active magma. The percentage: 85 percent solid material and 15 percent (at the most) magma. . . “

(old) USGS says they have unreliable helicorders at Yellowstone and readings showing jumps are just mistakes. “Some faulty readings from a seismometer tracking activity in the Yellowstone National Park area has some folks predicting an impending Yellowstone volcano eruption, but U.S. Geological Survey officials say the data is bad.”

Past 7 days earthquakes M2.5+ in the USA

Dutchsinse’s opinion on it: “If the name of the street (which is very short by the way) is because of an old Quartz mine at the location, then we can safely assume via an educated guess, this 3.4M event falls in with the rest of the 3.0M+ events this past week…. volcanic related, not fault zone.”

Is US government working on secret evacuation plan in case Yellowstone megavolcano erupts?

May 16 – Dutchsinse has an earthquake map showing US activity for the past week. “. . . showing as a 3.4M on the NW edge of the craton in Montana…“

May 17 – This screen grab from the ANF Map today shows a new small earthquake (red box) southeast from Yellowstone National Park. The earlier, larger quakes this week are in grey and blue.

(old) The Giant, Underestimated Earthquake Threat to North America
The enormous fault off  the coast of the Pacific Northwest has been silent for three centuries. But after years of detective work, geologists have  discovered that it can  unleash mayhem on  an epic scale.

May 24 – [15] Recent Earthquakes in the Intermountain West

(old) Are Hungry Bears in Yellowstone Attacking Humans for Food?

Swarm of earthquakes in Yellowstone Park

Dutchsinse says that big landslide out that way that was on the news was caused by fracking.  More items added to the Yellowstone news page.

A big 6.6 quake at Vancouver in Canada before midnight showed up on Lake FUBAR helicorders.

Scary: Louisiana Creating Database Of Residents Who May Be A ‘Risk To The State’

[snip] . . . Environmental activist Erin Brockovich and dozens of military veterans rallied outside the Supreme Court today as the justices heard arguments that an electronics company was responsible for contamination at its old plant in Asheville, North Carolina.

The case,  CTS Corporation v. Waldburger, will decide if federal environmental law preempts North Carolina’s statute of repose, which imposes a 10-year limit to file a claim.  A ruling by the Supreme Court in favor of CTS Corporation could create a climate in which corporate polluters would be “rewarded” for concealment and material misrepresentation of their environmental problems. . .

Live streaming of the weekly meetings can be seen at:
http://new.livestream.com/rrv/

ENE-News – Mistake at Congressional Hearing? Senator: “Radioactive releases from WIPP have been at levels that are a public health danger” — EPA: “This is a big deal” (VIDEO) < article mentions Mining Awareness 🙂

ENE-News – AP: Crews retreat after nuclear material found at WIPP — Officials: Correct to turn back, contamination was increasing — Robots brought to site for radiation levels too high for humans — ‘Significant amount of information’ will be revealed to public in next few days (VIDEOS)

A quote from Mining Awareness (scroll half way down):

While Farok Sharif of WIPP getting demoted appears good news on the surface, we must examine what he did at WIPP. He orchestrated a speed-up of moving radioactive waste. On the Nuclear Waste Partnership LLC web site it is still proudly proclaimed that Farok helped WIPP to “ramp up” from processing one to two waste shipments per week to more than 30 per week. His background is a BA in “Production and Operations Research Management” and a MBA from New Mexico State University.

State agency:  the nuke waste is all getting backed up in the parking lot(!)

(Feb. 27) “In light of DOE’s inability to operate, they are facing storage deadlines in their parking lot and Waste Handling Building.”

History: “The volcanic eruptions, as well as the continuing geothermal activity, are a result of a great cove of magma located below the caldera’s surface. The magma in this cove contains gases that are kept dissolved only by the immense pressure that the magma is under. If the pressure is released to a sufficient degree by some geological shift, then some of the gases bubble out and cause the magma to expand. This can cause a runaway reaction. If the expansion results in further relief of pressure, for example, by blowing crust material off the top of the chamber, the result is a very big gas explosion.”

Yelowstone is an 8 on the  VEI Index:  “super-colossal” (if it blows).

Before It’s News – Yellowstone Magma Chamber Animals Leaving Yellowstone? What Do They Know We Don’t Know?

Some science people say don’t worry – Earthquake Shakes Yellowstone But No Volcano Threat Looms, Scientists Say  But evidently everybody is worrying – Animals Allegedly Fleeing Yellowstone Results In Yellowstone Volcano Search Trend. . . and those were not small quakes there this week.Yellowstone National Park rattled by largest earthquake in 34 years

” . . .  Although the YouTube video says the animals are leaving, park spokesman Dan Hottle told the Jackson Hole Daily (http://bit.ly/1hcK4VV) that they are actually running toward the park’s interior and the volcano. “

Yellowstone animal exodus: Did they detect ‘something deadly’?

Park official: “Why do some animals leave the park? Winter.“

Yellowstone, Something Very Bad Is Coming – John Moore  < has video

Mar. 30 – KMVT – Earthquakes Reported At Yellowstone And Central Idaho
April 2 – KTVB – Could a big earthquake hit Idaho? < has video
April 10 – Earthquake near Challis biggest in Idaho since 2005 < has video

[snip] . . . “The “Red Alert” status for Borah Peak Mountain (the largest in Idaho), this report states, means that an eruption is forecast to be imminent with significant emission of ash into the atmosphere likely.. . .
. . . . Critical to note about Borah Peak Mountain and central Idaho, this report says, is that it is a part of what is called the Intermountain Seismic Belt (ISB) [photo map 1st right] which extends from Southern California and connects many of the Western United States regions, most particularly the Yellowstone Caldera, and is overdue for a catastrophic volcanic eruption event. . . .”

(Reuters) – Hundreds of low-level and medium-sized earthquakes have struck central Idaho since last month, puzzling geologists who wonder whether the ruptures portend a much larger temblor to come or are merely the rumblings of a seismic fault previously thought to be dormant. . . .

RSOE fell for it too.

Prepping for the ‘big one’: How bad could a Utah earthquake be?

” . . . At the University of Utah, seismologist Katherine Whidden said she doesn’t believe devastation in the Salt Lake Valley would approach the level it did in Haiti, but she also acknowledged it would be plenty bad.

“The problem we have here is that all the population is right on top of the fault,” Whidden said.

A 7.0-magnitude earthquake would likely create a 5- to 10-foot rift along the responsible fault line.“

At the University of Utah, seismologist Katherine Whidden said she doesn’t believe devastation in the Salt Lake Valley would approach the level it did in Haiti, but she also acknowledged it would be plenty bad.

“The problem we have here is that all the population is right on top of the fault,” Whidden said.

April 18 – Idaho Earthquakes: Are They Nothing or Indicators of Something Big?

Is the mother of all quakes coming soon?

“The last major earthquake took place in 1877. Since then the plates have moved about 10 metres closer together,” says Tilmann. “The tension that’s built up can only be freed by a major quake.”
The most recent earthquake in early April did release some pressure, but wasn’t enough to relieve the entire segment.

Wyoming – A Small Creek Connects The Atlantic And Pacific Oceans

Magma levels rising in Mount St. Helens volcano 24 years after it erupted – There are no signs of an impending volcanic eruption

Dutchsinse points out a series of sudden volcano eruptions around Japan – a comment there asks if that affects Mount St. Helens etc.