LA12 shows a big ding at 6 minutes after midnight. But the better monitors from Quake Watch show this at LA12:

Still having intermittent bangs at Lake FUBAR. This big one (seen on the micro-set LA21)  after 3:50 a.m. showed on all helicorders.

Around 4 p.m. everything went to pot at Lake FUBAR. LA12 shows it

– we are back to the fuzz on the graphs. 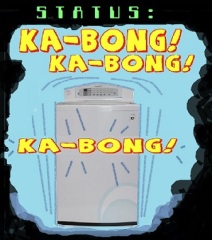 ALSO – Camp Minden  burn plan story is updated. Happy news for once as it looks like everyone contacted their state reps to put a hold on it.

The parish has put up NEW PHOTOS!

[view more pictures by navigation at the bottom] 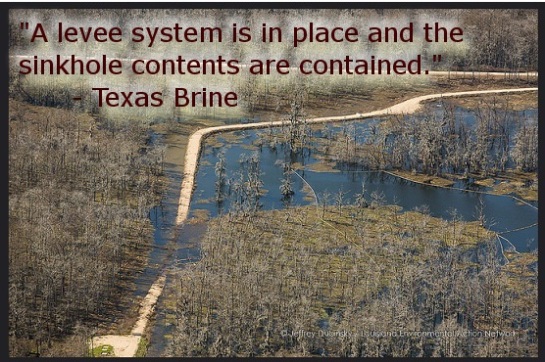 COMPARE: 2014 Jan. view of Lake FUBAR from the MAP page. Other map from then.

Map showing wells [PDF] OXY Wells map
Freedomrox (2013) – Louisiana Sinkhole: WHO KNEW? EVERYONE! EXCEPT THE VICTIMS! < all about Oxy 3

The helicorders showed ever increasing tremors Thursday. Around dusk they increased into fuzz on the helicorders and that increased over night. It is on all the monitors.  LA12 shows it – 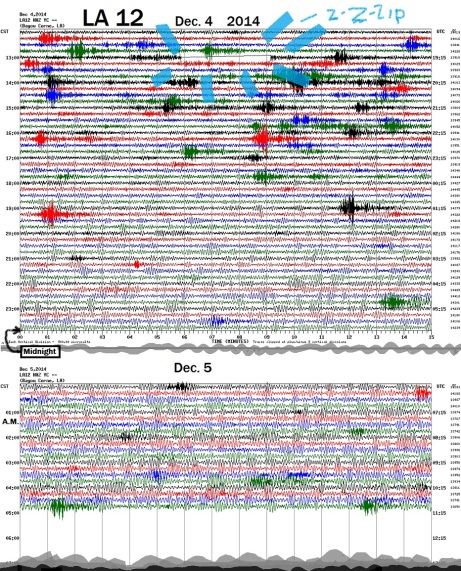 BAYOU CORNE — After more than two years, the mandatory evacuation order for people living near an Assumption Parish sinkhole has eased for some in the area.
The parish policy jury said Thursday that an area east of Grand Bayou along Highway 70 has been re-designated to a voluntary evacuation zone, rather than a mandatory one…

” . . .  They added it is believed all of the gas has been removed from the area. They will continued to investigate and monitor the area to confirm that the gas is depleted. . . . “

” [scientists] look at how a layer beneath the Earth’s crust may be responsible for volcanic eruptions.
The discovery challenges conventional thought that volcanoes are caused when plates that make up the planet’s crust shift and release heat.
Instead of coming from deep within the interior of the planet, the responsibility is closer to the surface, about 80 kilometers to 200 kilometers deep — a layer above the Earth’s mantle, known as the asthenosphere.”

LA12 shows seeping-sloshing of small fluid movement all morning. They show as rick-tack lines on the chart.

After 10 a.m. something ominous starts up at LA21. It is near the SE corner of Lake FUBAR.

The sloshing stops and there are normal dings and dangs until 11:45 p.m. – then fluid movement again.

Keith M. did some new maps and they are linked on the MAP page.

A south Louisiana flood board has launched a legal fight against a new state law aimed at retroactively killing a lawsuit filed last year over coastal damage attributed to oil and gas drilling.
The Southeast Louisiana Flood Protection Authority-East argues in federal court papers filed Tuesday that the law cannot be used to block the lawsuit. . .

(Note: continuing  news about this flood board saga are regularly on the sidebar in the RSS feed section )

NetVibes page helped with this story – 😉

Someone is foolin’ with the helicorder settings!

A couple of big dings Monday night, after a day of wildness (scroll down to earlier post) and then after midnight they pulled a stunt! 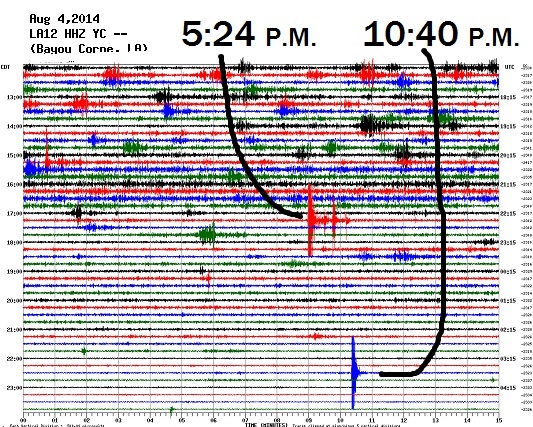 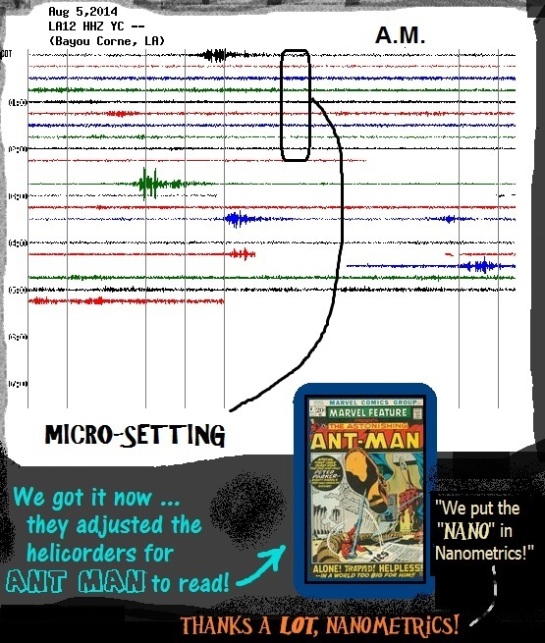 So we don’t expect real-time info from Lake FUBAR Tuesday.

AFTER 5:30 a.m. LA12 shows big activity – even though the helicorders are set on teensy-setting !!

A big ding at 3 p.m. showed up differently on the other helicorders. It was very big at the top of LA10 but not there at all on the bottom. 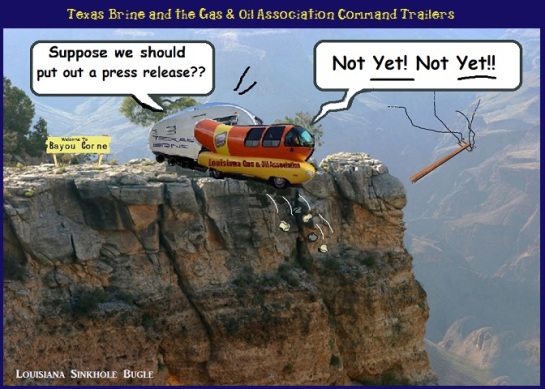 Helicorders – There was a big ding Friday night at 8:45 p.m. then it calmed down. It kicked up again a little starting at 5 a.m. Saturday.

Then Saturday some grumbles and pauses then …

There was a big 6.6 quake at 5 p.m. CST over in Micronesia … but it was 3 hours before the fluid movement in Lake FUBAR. So it is of local origin. Oddity: The fluid movement kept going for OVER AND HOUR(!!). See LA12 chart. And note scary spikes after 11 p.m.. 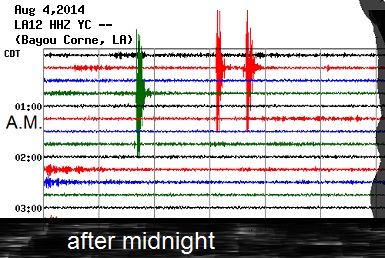 We are still waiting for a newer Crosstex update. They haven’t had one since July 24. But that cannot be blamed on the DNR website person. They have a semi-new update there for Chevron from July 27. So DNR is posting some updates and not others, or else they haven’t gotten the info from Crosstex to post yet.

I think the bigger jump on the monitors is on the SE corner of Lake FUBAR next to the incredible amount of butane.

Oddity – 1 a.m. seems to be prime time for Lake FUBAR to turn into an underwater disco. Check out previous headlines here with “1 a.m. ” in the title! 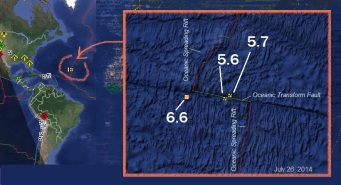 If you took a bird’s-eye view of the Appalachian mountain chain, you could pretty much trace a 1,500-mile straight line from Newfoundland to Alabama, notes Nature World News.

Except, that is, for a little squiggle in New York and Pennsylvania. So what on earth could make a mountain chain bend like that? Geologists think they’ve figured out the answer, and it’s not so much “on earth” as “in earth”—namely, an underground volcanic rock about 60 miles by 280 miles in dimension. . . .

Multi-Chem, a Halliburton-owned business that blends chemicals for oilfield production, including fracking, paid no state environmental fines when its New Iberia plant exploded in 2011.

Instead, the company received an expedited environmental permit to build a new plant in Vermilion Parish without public notice or a public hearing and was granted $1.8 million in state property tax exemptions over a 10-year period to build the new plant. . . .